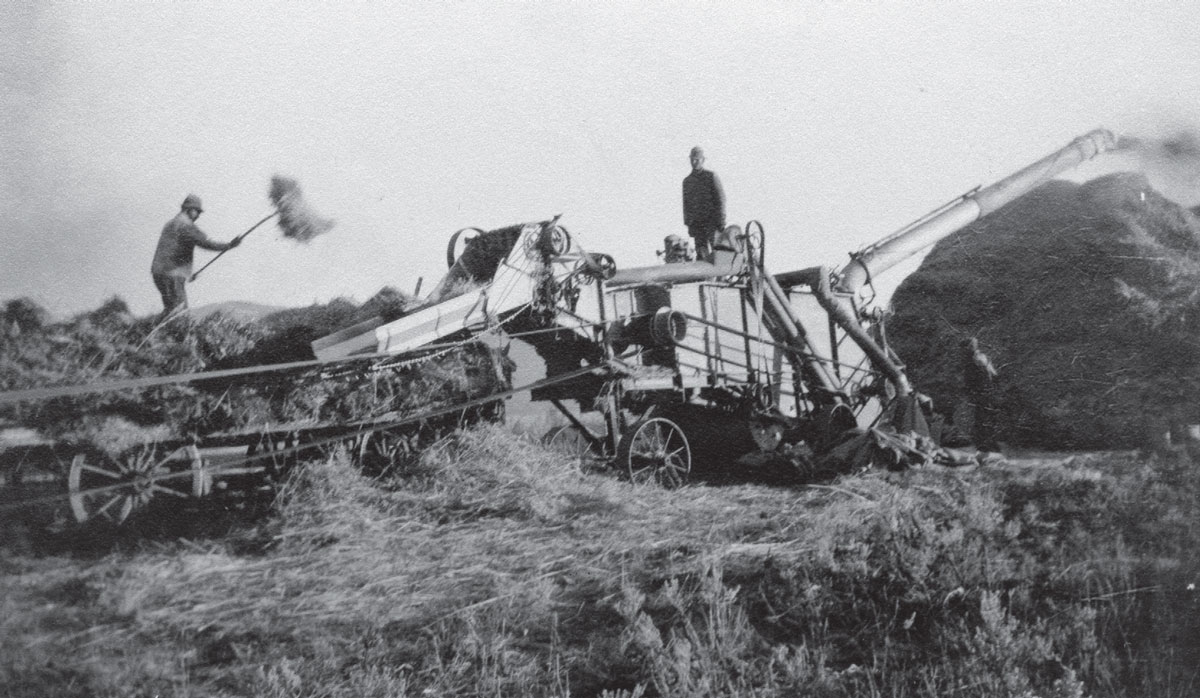 Two men threshing grain on the Vagneur Ranch, circa 1910–20: A steam tractor is powering a conveyor belt, which in turn works the thresher. The thresher separates the grain from the stalk, or the seed from the straw. The steam tractor was fueled by water heated by burning railroad ties. The separated grain was put into a storage bin, and the hay into the pile behind it.

It reads like a Rumpelstiltskin tale of spinning straw into gold, except for Roaring Fork Valley ranchers and farmers the task was turning wheat into grain. Rather an ill-tempered imp, however, the Red River thresher, made by the Oliver Farm Equipment Company in Richmond, Indiana, performed the job.

During the mid-1900s, sheaves of wheat, oats, rye and barley—already cut and bound—were fed into the threshing machine to be separated into straw, chaff (husks) and seed (grain). The straw was blown out of the top of the thresher and the chaff and grain were separated and bagged. It was a labor-intensive process that required someone to watch the thresher to prevent jams.

Steam-powered tractors provided power for the threshing operation, and ranchers used water wagons to replenish water when necessary. Sometimes the separated grain would go directly into a grain elevator instead of being bagged.

Threshers were expensive, so farmers in the Valley shared theirs. The machines moved between ranches when each family was ready for separating their grain crop, and the newspaper sometimes reported on which property a thresher currently operated, such as the Gerbaz’s or Vagneur’s properties. The ranchers helped each other during this part of the harvest, and their wives would prepare food for everyone involved.

Today, threshers are still used in combination with a machine that also harvests the wheat, and the resulting equipment is known as a combine. In terms of the mechanics, the thresher system is much the same as it was in the early 20th century. However, less wheat is harvested in the Roaring Fork Valley today, as the land has produced something more valuable than grain or gold: real estate.

Edible Traditions is produced by the Aspen Historical Society. For access to the full online archives, including more than 10,000 historic images, visit AspenHistory.org or call 970.925.3721.

see all
Article from Edible Aspen at https://edibleaspen.ediblecommunities.com/things-do/valleys-threshers